Meet the women teaching the next generation of tradespeople

"I think the unions have pivoted to make hiring women a priority, but the private sector is still low." - Kristine Byers

During Kelly Kienleitner’s first week on the job as a winder, a six-foot-six man stomped up to her and in a great, booming voice bellowed, “This is men’s work!”

Kienleitner was the first female winder to be certified in B.C. and the first woman in Canada to achieve her winder electrician Red Seal. She was a single mother and a 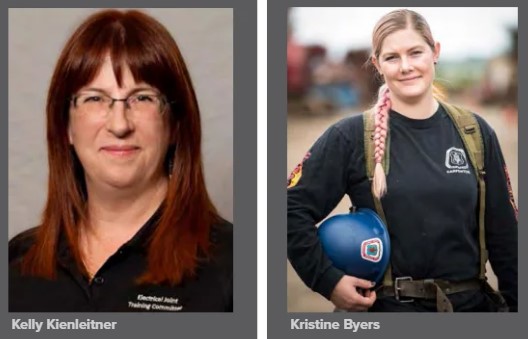 former corporal with the Canadian Armed Forces Reserves. She had grown up in the military; her mother was a sergeant with the military police in the 1960s.

In other words, Kienleitner was not easily intimidated.

She looked up at her fellow winder and said, “If you think this is men’s work and the only difference between us is anatomy, how about you do all the work that requires a penis and I’ll do the rest?”

Three days later, the man apologized and offered to take her on as an apprentice. It wasn’t the last time Kienleitner had to prove herself in the trades, and it wasn’t her last teachable moment.

Kienleitner is the chief instructor for the Electrical Joint Training Committee. She has two Red Seals and is a master electrician.

Women account for just six per cent of trades apprentices in the province, according to the Industry Training Authority September 2021 quarterly report. The biggest barrier for tradeswomen is a lack of female role models, according to the BC Centre for Women in the Trades 2020 final evaluation report.

“If people don’t see themselves in roles, they won’t go for them,” said Kristine Byers, a Red Seal carpenter and instructor. “If we have more women as instructors, we’ll get more women in the trades.”

Byers teaches introduction to carpentry and formwork at the BC Regional Council of Carpenters Training Centre. She is a trustee on the executive board for the United Brotherhood of Carpenters (UBC) Local 1907, the Chair of the B.C. and Yukon regions of the Sisters in the Brotherhood, an alliance with the UBC, and a director of Build TogetherHER BC, the women’s committee of the BC Building Trades. Byers sees a demand for women instructors in the construction trades and regularly receives offers to teach.

“I think the unions have pivoted to make hiring women a priority, but the private sector is still low,” said Byers. “There are a lot of women who go into the trades, but they don’t stay. Women have a higher dropout rate.”

Byers understands why. She began her trades journey at Okanagan College. Her first class was half women and half men. By her fourth year, she was the only woman in her program. There were a couple of local contractors that hired all the men in her class but none of the women. Byers shortened her name from Kristine to Kris on her resume and got an interview.

“As soon as I walked in there, I knew something was wrong. The employer came out and told me, ‘I don’t hire women, you’re going to distract the men. You’re only here to find a husband.’ Nobody wanted to hire women in 2007,” said Byers.

In 2003, Kienleitner also faced hiring obstacles. She was forced to switch trades when a new owner took over her shop.

“He walked right up to me and said, ‘I’ll never have one of your kind in my shop,’” said Kienleitner.

He meant a woman.

Kienleitner had a choice. She could go work somewhere else—far from her son—or she could take a pay cut and start over. She started over and earned a second Red Seal. Today, she and Byers teach future generations of tradespeople.

Both women see positive changes in the building trades industry, thanks to the unions, programs such as BCCWITT’s Be More than a Bystander, and contractors implementing codes of conduct regarding bullying and harassment. The number of women in the trades is growing, but not fast enough. Kienleitner and Byers want to see more women step into teaching roles.

“I see so many great women who can do this,” said Kienleitner.